Is this love: herzog and de meuron: vitrahaus exterior

I think I just fell in love. I don't normally do this, but this caught me off guard. Its simple - in the basic form (2D house), its dynamic in its use of the form (stacked & cantilevered) and it is utterly inviting (large views of what's inside, benches integrated into courtyard facade). Also, detailing - i mentioned the integrated bench in the larchwood facade of the courtyard, but wait till you see the drain pipes - wait what?!? - Yes, actually, you don't see them - they are enclosed in the plaster, but drip their delivered goods into framed drainage...perhaps a detail only the odd will enjoy. In short, I am due in Weil am Rhein, and though I am dissappointed that interior images of the museum are yet available, I'd rather explore the movement through the space with my own two feet and with my sneaky camera in hidden hand. There are more images (really - even more!) on Design Boom's site (including models of the building), along with a clip of Herzog himself discussing the concept. View and drool, and share your gushings - or if possible - criticisms (i dare you!). UPDATE: There are interior images - view and wipe your face!
herzog and de meuron: vitrahaus in Weil am Rhein 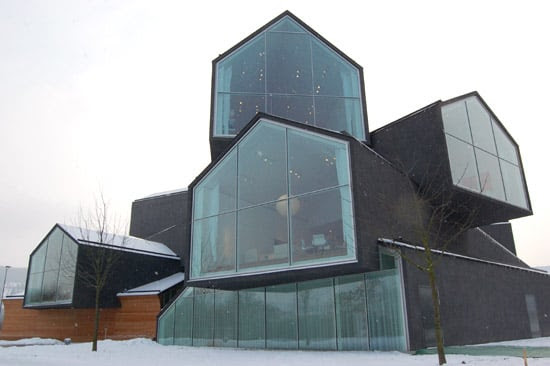 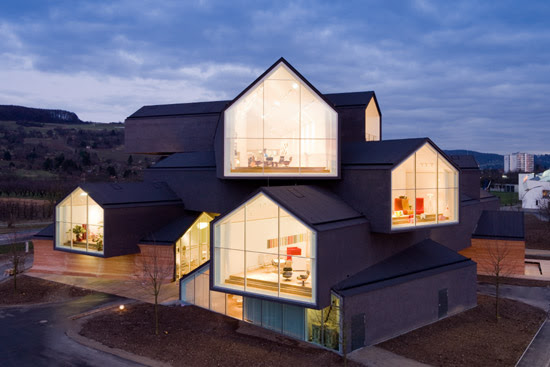 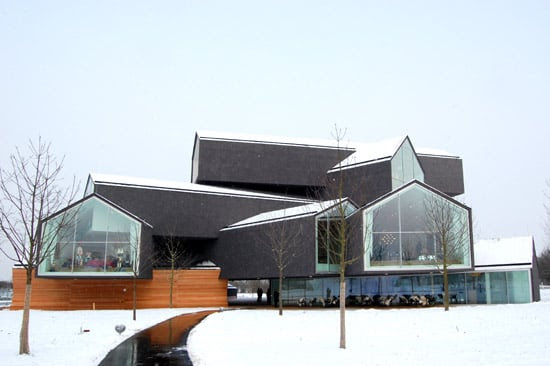 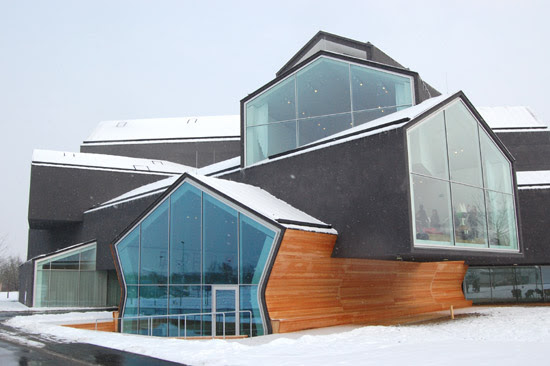 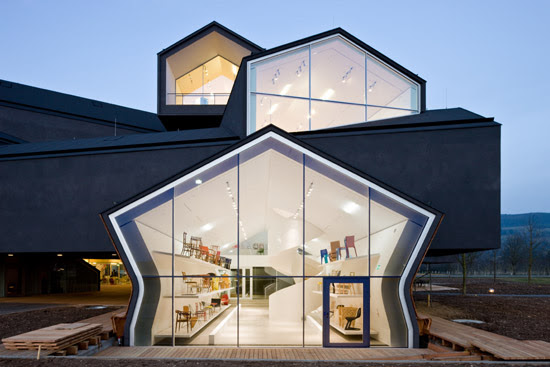 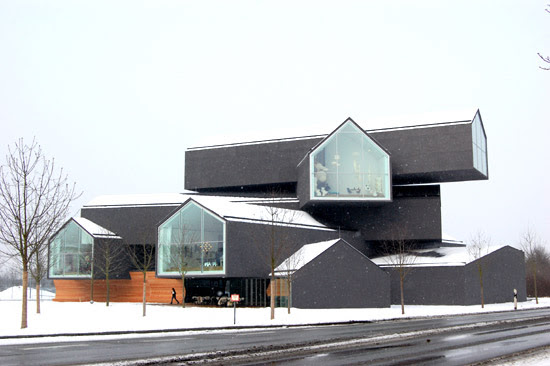 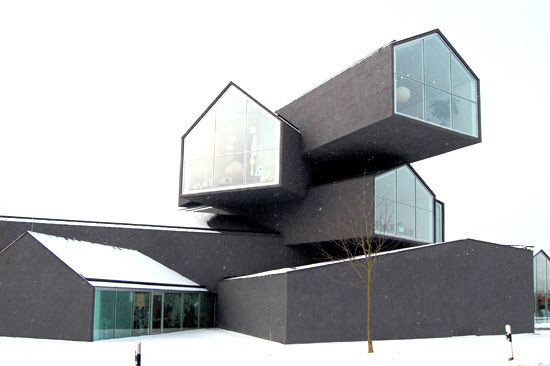 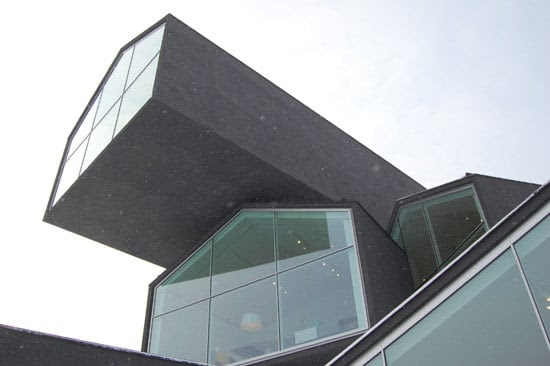 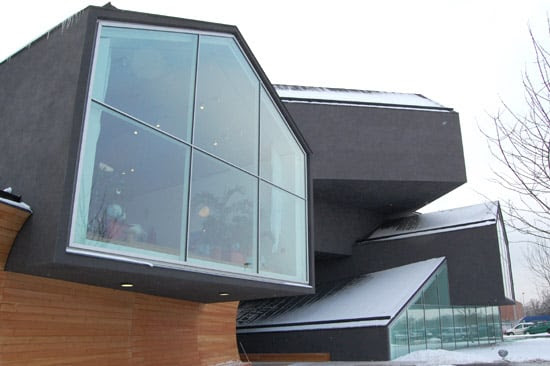 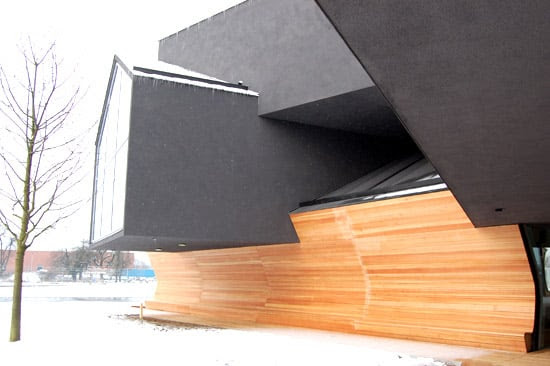 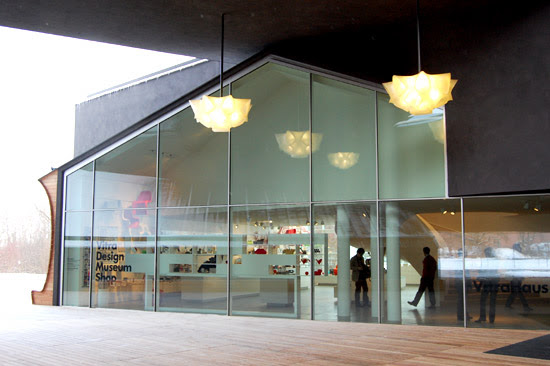 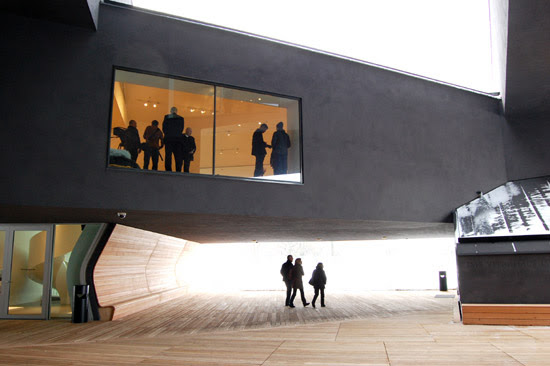 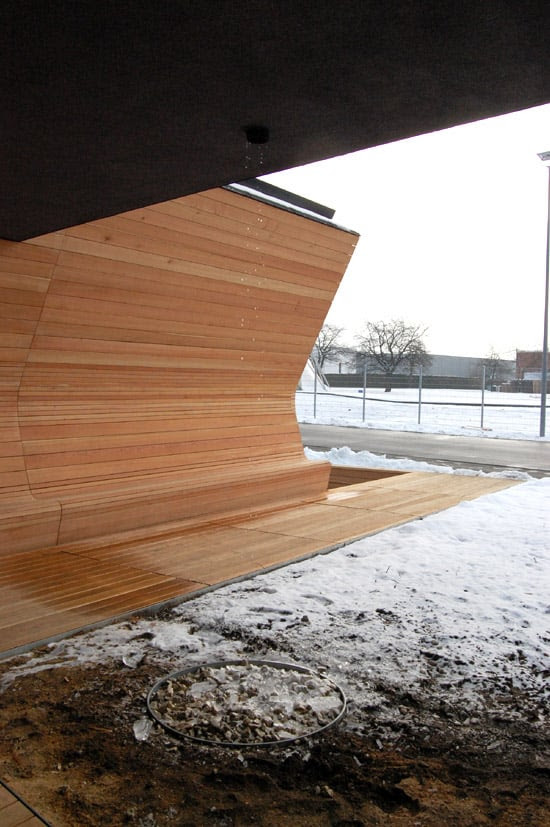 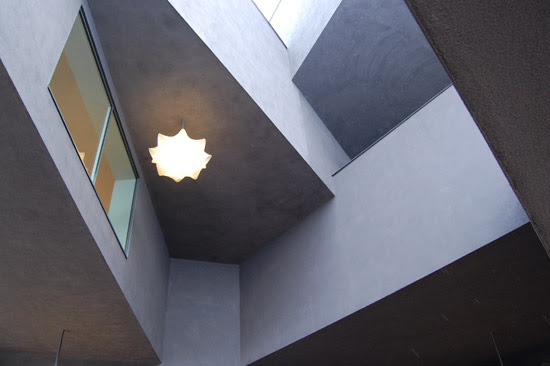 There is considerable amounts of our life that are based on assumptions. Without basic assumptions (the sun sets and will rise again) our daily life would be much more challenging (we assume folks around us understand the language we share, and that clothing is appropriate and certain currency is valid...). These assumptions also apply to how we experience space: how doors open, how walls are solid, floors are flat. Poor design, however, can turn our assumptions against us and cause us to think ourselves inept, when in fact it is a failure of the design to match assumptions - or to apply to a different culture's assumptions. This phenomena is well explained in the wonderful book by D.A. Norman Design of Everyday Things.
Not all design that challenges our assumptions is bad, it can be advancing new assumptions, or challenging stale cultural ideals. One such notion is that of the treatment of mental health. Whereas once all those with any mental issues were hidden away in institutions, today there is a blend of talk and pharmacological therapies for those struggling with such issues. One approach on the talking side of therapy is that, in many cases, the mental health of an individual only becomes problematic when there develops a significant discrepancy between internalized assumptions and the outside world. Based on this approach, one can best help mental health concerns by breaking down assumptions as to help re-align them [clearly not all mental health issues can be addressed in this manner, but this is only one approach]. The mental health clinic designed by Nendo in Tokyo has built this philosophy, physically. This clinic provides "standard consultations with a psychiatrist, corporate consulting and support for patients returning to the workplace."
Enjoy the photos below and share your thoughts on this unique space (given its function).
nendo: mental health clinic, tokyo: via DesignBoom 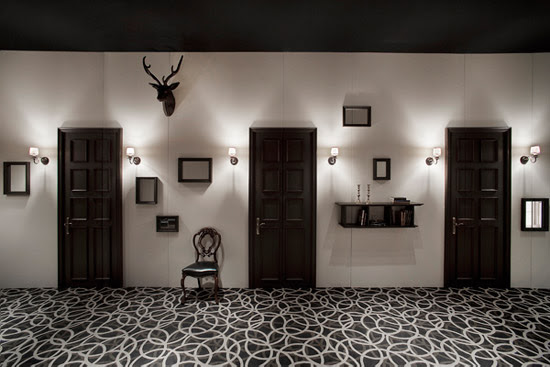 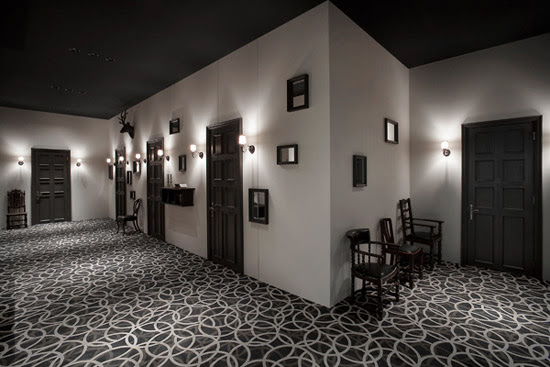 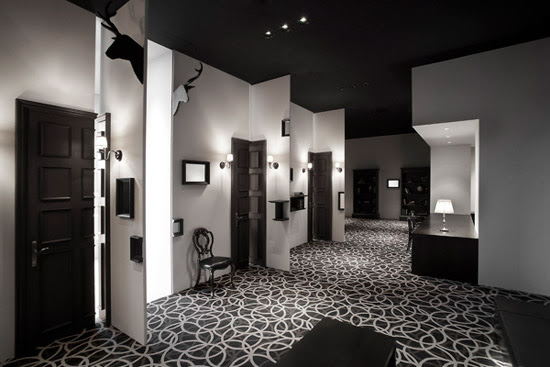 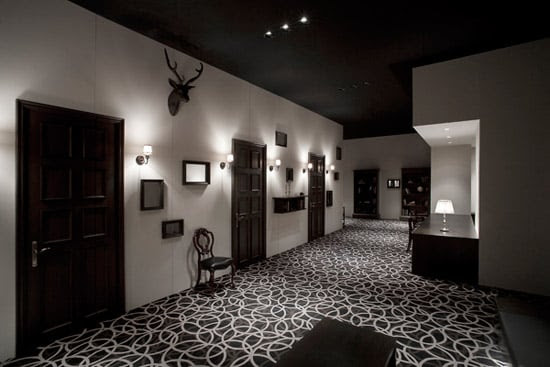 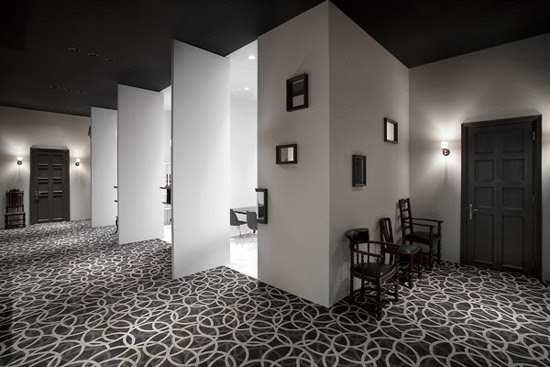 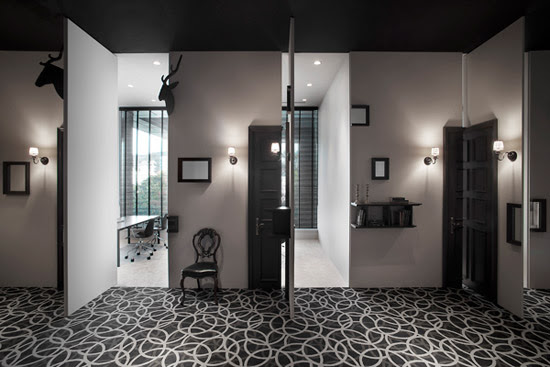 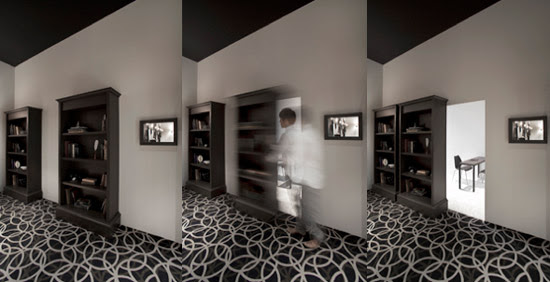 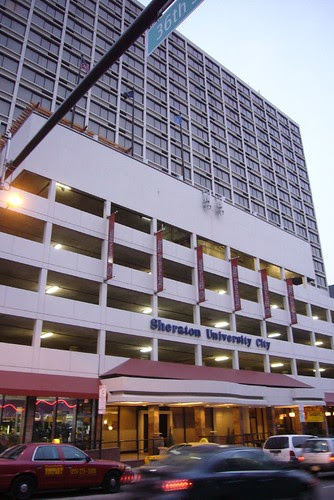 This is one of two hotels in the University City section of Philadelphia. It is adjacent to the two major universities, one of which is Ivy League. Does this look like what you would imagine would match the above description? No? Does it look like a parking structure? Yes! That's because it is - in part, the part that 'welcomes' their guests.
I get it - parking structures are a necessary evil in the culture of the auto in which we've resided for the last 60 years or so. Parking structures are holding cells, dead-space, they are not active - you place your vehicle and you leave, you find your vehicle and you leave. So who thought this should be so prominent and bald. Utilitarian, certainly, but I cannot imagine that Sheraton conceives of its brand as such.
Let us explore some approaches to parking structures.
There are parking structure kits, it seems, as illustrated below. These are dino-sized tinker toy, assembly requires a massive crane. However, these are quick to build, and seem to have custom color options - though, I would assume all options are in the "neutral" range. 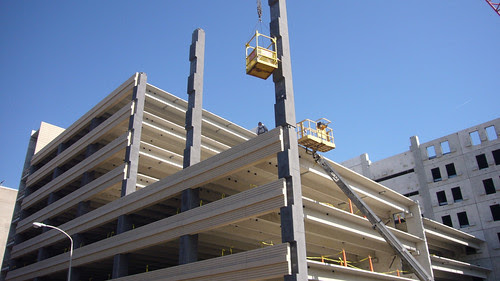 There are disguises for parking structures. Pictured below is the woven facade of a structure. Adds considerably more visual interest than the default solid/void alternation of standard models. It isn't as colorful as some, but it is a simple and more graceful approach. 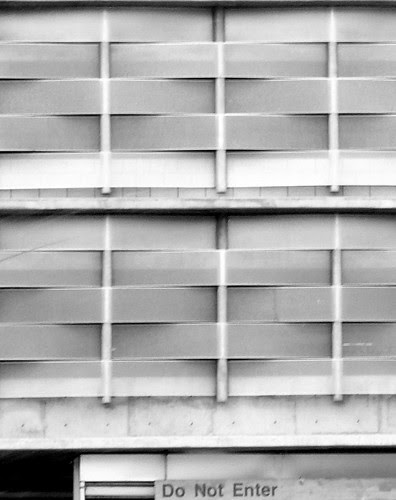 As for the Sheraton in University City... It has some potential. To start lets break down its core form - intersecting boxes 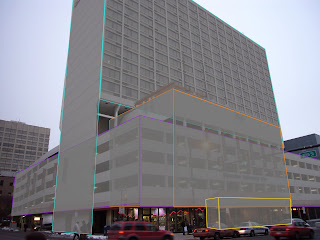 The entrance to the building is relatively unemphasized, it could be enhanced by reinforcing the existing intersecting boxes all while denying the parking structure-ness of the front facade. This would be the most simplistic update. The new facade could be a solid continuous surface or a perforated screen and could protrude from the current facade. Removal of the burgundy awnings and refacing of the existing concrete 'awning' with a similar material to the upper facade, as well as more linear lighting could better serve the entrance by making it more noticeable and inviting. 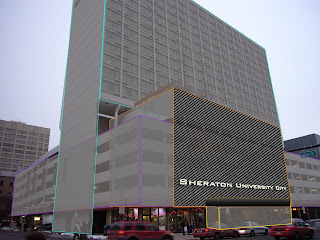 There are many possibilities for this building, one could imagine aluminum ribbons (sketched below) or something as bold (garish, even) as an Escher inspired screen wrapping the entire parking structure that showed the mascots of the adjacent universities transitioning into one another. 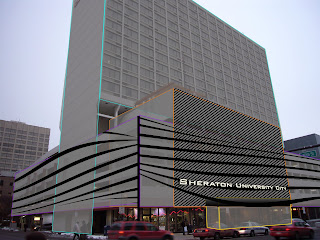