Reinventing the Automobile - Or Urban Dreaming

" Although  this idea of the micro-transit unit has its appeal - it allows for individual control of travel (when and whereto), protection from weather, and smaller footprint (both carbon and physical), it has its drawbacks too. This mode will face similar issues as bicycles have faced for years - a respected place on the road. Smaller than regular vehicles and the larger trucks and buses, there is risk involve, as many bicyclists are well aware. Perhaps separate lanes could be crafted - as shown below - but then do the bicyclists really feel safer if their lane is shared with motorized vehicles, pint-sized or not? If there were such grand boulevards as to allow for the implementation of such a plan as illustrated, perhaps the significantly wider bike/city-car lane would work. However, I do hope that pedestrians are so negated as to have standing room only when they get out of their city-cars or step off the bus. Note, the space for parking city-car's should not be considered sidewalk, sidewalks are spaces for non-vehicular mobility - i.e. your feet, or wheelchair (if its motorized it may be required to run in the "small-mode" lane).

via FastCompany
What may better serve the cities which may choose to embrace the kindler/gentler future of city-car's would be a retro-fit plan. In Philadelphia, the Chestnut Street Transitway - a short lived, and clearly unsuccessful venture of American urban pedestrian mall may get a second, more successful life. It could be that Bacon, and other such planners had the right ideas, just at the wrong time - both culturally and technologically. As the original drawings from the Philadelphia City Planning Commission illustrate, the concept was to be largely pedestrian with a trolley line running down a narrowed street. What if this were small-mode only? It may not work in Philadelphia - most folks here commute out of the city, highways are no place for vehicles smaller than a Smart car. However, if you could get folks to buy into the city-car concept, car-share programs convert to or add city-car fleets, issue tax rebates for urban residents to downsize their vehicles (if not eliminate entirely), then  you could have streets with bikes and pedestrians and city-cars. Buses would be on schedule because of reduced congestion, taxi drivers might take issue, but there will always be folks unable or unwilling to drive themselves from place to place.

via Philadelphia Planning Commission, archive
Clearly there are many obstacles to this mini-vehicle future. It may be that this type of vehicle will take off first, not in our urban centers, but in resort towns and these new suburban mixed-use developments (they used to be called towns, these are more likely incorporated and planned/built ground up, but we are in a cycle of rediscovering things). The hope is that these will be shared vehicles, wherever they wind up getting a curb-hold, encouraging shared resources, discouraging waste, allowing flexibility for the individual and the community - and reaffirming the connection between the two. The new face of public transit may be mini-mass-transit. This may be a book worth reading, if only to see the potential yet to be completely denied.
at 11:47 PM 1 comment:

RVs are for poshed out neo-hippies. This bigrig is for those who mindfully use the resources available - liquid shipping containers. Plan your future roaming around the barren wasteland in this "keg apartment" - this is the minimalist plop of dystopia. So long as its being hauled by the Peterbilt 386 Hybrid (in green of course)...
via DesignBoom: aristide antonas: keg apartments: 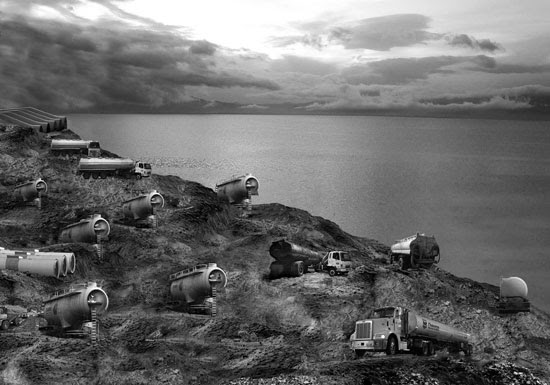 while transforming shipping containers into livable structures is now common, aristide antonas imagines doing the same with liquid containers. antonas and collaborator katerina koutsogianni use existing transportation and re-imagine this would-be trash as a system of 'abandoned spaces'. the keg apartments are proposed as an architectural program in two versions. the trailers can be detached from the car and used as a stable residence or left attached and used more like mobile home. windows would be carved out of the metal structures and used as points of entry. a large circular window cold be made at the front end facing the car. this way, the inhabitants could move freely between the two units as if they were one. the interiors are left very raw using the existing structure to anchor lofts and amenities like a bathtub. while the keg containers don't have the most spacious interiors, they could be put to use as vacation homes, much like recreation vehicles today. 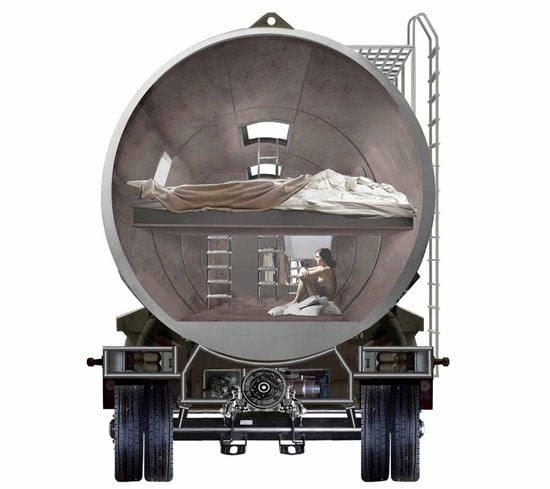 I recently attended the Drexel hosted gathering at which Meyer Scherer & Rockcastle, Ltd architects, Garth Rockcastle, FAIA & Jeffery Scherer, FAIA, presented part of their design for the new URBN Center @ Antoinette Westphal College of Media Arts & Design. The audience of about 40 was a mix of design professionals (including a few members of the Design Advocacy Group), students, and faculty. The meeting was held in the building to be renovated (a Venturi original from the 1970s) and the space itself was set up as to allude to the future light-well planned to cut through the building. In the comments/question section of the program a few concerns were brought up regarding the project including revealing of structure both on the interior and on part of the exterior as well as the the name of the project "U-R-B-N makes it seem like we are incapable of spelling properly."
The most striking part of this event was the conversation I had with Garth Rockcastle. He was genuinely excited about the materials and technology planned for the space, not all of which were presented at this event. Some of these materials would allow for the space to transform visually throughout the day, and allow the space to be a physical manifestation of the learning going on in the space (building section, runway, billboard). He spoke of the conceptual layout of peripheral "private" spaces moving towards the central "public" spaces - and how he believed this would enhance learning by encouraging cross-disciplinary inspiration and collaboration. I really appreciate his enthusiasm, and have hopes for the design to accomplish this.
Overall, I was underwhelmed by the renderings, which I find congested and uninformative in terms of what really matters in a building of this type: the classrooms. As an art/design center there will be a variety of classroom environments, studio, computer lab, lecture, but those are not being presented, yet. I can only assume much is still being resolved concerning the particulars of these spaces - but as the Mike Glaser mentions in the video Drexel produced on the project - this building will be a tool to attract the best future students. Knowing whether or not you'll have dedicated workspace on campus can be quite the decider for students. This meeting seems to have been a courtesy to allow for some "public" commentary on the project - and I'm hoping for a fuller reveal in the coming months. 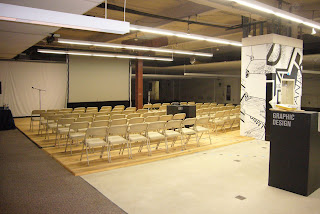 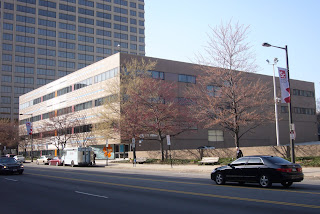 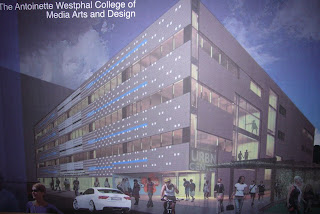 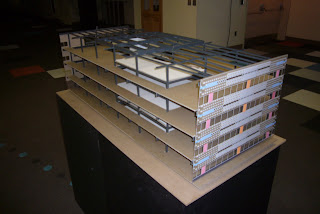 Partial model of 3501 Market Street with planned light-well
A two part video, which distractingly contains a few minutes of Drexel history and praise by Mayor Nutter and Governor Rendell can be viewed here on Drexel's website about the project, including additional renderings of the space. 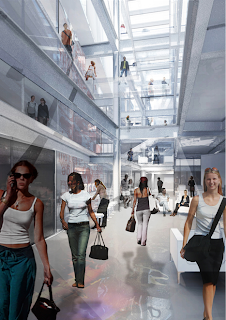 Space and Music: Creation in reverse

"When a space becomes available, work emerges to fill it."
David Byrne published a longer version of the talk he did at TED recently on his blog. The video of his talk is not yet up, but I highly recommend reading about the evolution of spaces and the music made for them from African tribal to Gregorian chants from cathedrals to the super-tricked out car stereo.
Excerpt: 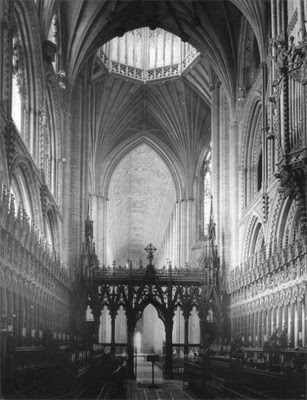 Western music in the medieval era — Gregorian chants and such — was performed in these stone-walled Gothic cathedrals, and in monasteries and cloisters, which had somewhat similar acoustics. The reverberation time in those spaces is very long — more than four seconds in most cases — so a notes hang in the air and become part of the present. Shifting keys would inevitably invite dissonances and a sonic pileup, as the previously sung or played notes would overlap with the new ones. So, what evolved is what sounds best — it is modal in structure. This music often uses very long notes and slowly evolving melodies with no key changes whatsoever. It works beautifully in these spaces — in fact, the space even improves the music… it gives it an otherworldly ambience.
It’s often assumed that this music was harmonically “simple” (having few key changes) because these composers hadn’t “progressed” to complex harmonies yet. I’d argue that in this context there would be no need or desire to include complex harmonies, as it would have sounded horrible. Creatively they did exactly the right thing.

Here’s the church where Bach did a lot of his playing and writing in the early 1700s: 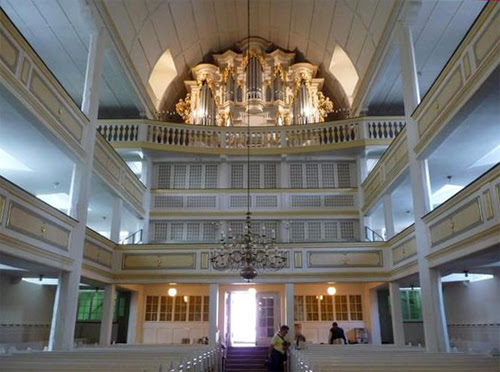 As you can imagine, there was already an organ there and the sound would be less reverberant than in the Gothic cathedrals, but still echoey. The reverb was so much less that, famously, Bach and others could introduce key changes into their music.
at 4:04 PM 1 comment:

Infrastructure isn't exactly the sexiest of topics, to the average individual. However, it is a topic that concerns everyone - unless you are thoroughly self-sufficient, living off the grid, in the woods.
As such, much of the existing american infrastructure (roads, bridges, sewers, powergrid) is long overdue for upgrades. There is much talk and some movement on the 'smart grid' which will better regulate supply versus demand on the power lines, though there are some interstate issues that become political potholes - hence the movement at the federal level. This is the case as well for much of the infrastructure renewal. It has barely been sufficient to maintain these all-to-necessary parts of our country, as we've seen with the bridge collapse in Minneapolis in August 2007, and the emergency repairs on I-95 in Philadelphia in March 2008. These events draw attention, though fleeting, to the troubles.
A public broadcasting initiative started in 2008 called Blueprint America looks at all of the various levels of infrastructure; how it is defined, the history of it, its present state, how the issue is being addressed, the finances, the political process for renewal, and the potential future for the systems.
One of the most interesting episodes that I've watched thus far is on the poster child of urban decline: Detroit. I highly recommend this video. It was recently announced that Detroit is in the process of analyzing how much of its massive 139 square mile area it can actually supply services to in order to request some of its citizens to relocate and concentrate the city as to achieve a financially viable density.
If you'd prefer to start at the beginning and see what all the hub-bub is about when it comes to infrastructure might I recommend The Big Fix
at 10:02 AM No comments: